As we celebrate our 50th anniversary in 2022, let’s look back at our very first steam excursion 42 years ago this month!

This silent, 8mm footage was recently acquired and scanned in high definition, though the photographer is unknown. It features the 765 operating west on the Norfolk & Western out of Fort Wayne through Huntington, Wabash, Peru, and Logansport, with additional footage at Monticello and Reynolds, Indiana, and Washington Hill.

After its initial restoration in 1979, Nickel Plate Road steam locomotive no. 765 ran from Fort Wayne to Bellevue, Ohio where it spent the winter. The following spring, test runs for the locomotive were scheduled on the Toledo Peoria & Western, where the locomotive operated in freight and pusher service for several days. The locomotive’s first fan trip was held on May 10th and May 11th between East Peoria and Keokuk, Iowa, and East Peoria to Effner, Illinois. Below is an excerpt from 765: A 21st Century Survivor on the 765’s first test runs:

Early in our steam career, we were invited by Bob Macmillan, then the President of the Toledo, Peoria and Western Railroad, to bring the 765 to Peoria for some test running and a few excursion trips. We figured the 765 was ready for some hard work. After all, we had run the locomotive from Fort Wayne to Sandusky and back hadn’t we? If we only knew how much we had to learn!

We spent a few days switching in the East Peoria Yard and then we were called to work the pusher job on Washington Hill. All things considered, the first few days went pretty well. At last, we were called to pull a TP&W freight train to Effner, Illinois. The railroad romanticists called it the “Night Train to Effner.” In retrospect, it turned out to be the “Nightmare to Effner.”

In performing the repairs on the 765, all the superheater units were removed and each was subjected to a hydrostatic pressure test. Many of those units had a lot of leaks and were repaired. But there isn’t anything like dragging a few thousand tons of freight to find out what is fixed and what isn’t.

After hammering east toward Effner for 50 or 60 miles, the locomotive was starting to steam poorly. The over-the-road vibration combined with the steam velocity through the superheaters caused the units to begin to leak. Leaking superheated steam expands so rapidly that the vacuum is destroyed in the smokebox and without vacuum, you lose the draft. No draft means no fire. The poor draft in concert with the southern Illinois dirt that someone identified as coal caused the coal consumption to rise dramatically.

The long and short of it is we ran out of coal just short of Watseka, Illinois. Fortunately, the “Tip-up” (the nickname the TP&W guys used) was in the midst of a tie replacement program. We temporarily made the 765 a wood burner for the next 6 miles. “Don’t burn any new ones!” Mr. Macmillan yelled from the crew car.

By this time the railroad president probably had begun to wonder why he ever invited us there in the first place. We struggled into Watseka and laid up for the night, with the coal space swept clean and the water level in the tender at about 6 inches.

Our crew, which numbered over ten, woke up an unhappy motel owner in the wee hours of the morning. We all registered in the last room in town. A dozen dirty and weary guys crowded into one room! It must have looked like a college fraternity trying to jam the whole house into a VW.

Coaling took place the next morning and we finally reached Effner, the end of TP&W trackage, later that morning. To his everlasting credit, Mr. Mac didn’t push us off his railroad and leave us at Effner forever.

If we had any success at all in our first 14 years of steam operation, much credit must be given to Mr. Robert Macmillan, the gentleman from Peoria.

As 1980 wore on, the Fort Wayne Railroad Historical Society had time to reflect on its accomplishments. At the time, founders Glenn Brendel and Wayne York wrote, “Admiring the 765 out on the road, or admiring her at rest, the 1975-1979 restoration may seem quite remote. But until the fire-up of September 1978, the FWRHS was faced with a seemingly impossible task. There was no assurance the 765 restorations would ever be completed. There were many dark, dark days when even after a full day’s work, no measurable progress could be detected…This was the largest steam locomotive ever restored outdoors without conventional facilities. A dubious claim of distinction. Without the help of friends and good neighbors, the project may have never been completed…the restoration of Locomotive 765 is as much a tribute to the perseverance of the Fort Wayne Railroad Historial Society as it is to the glory days of railroading.”

Thanks to Greg Scholl for the thumbnail photo. 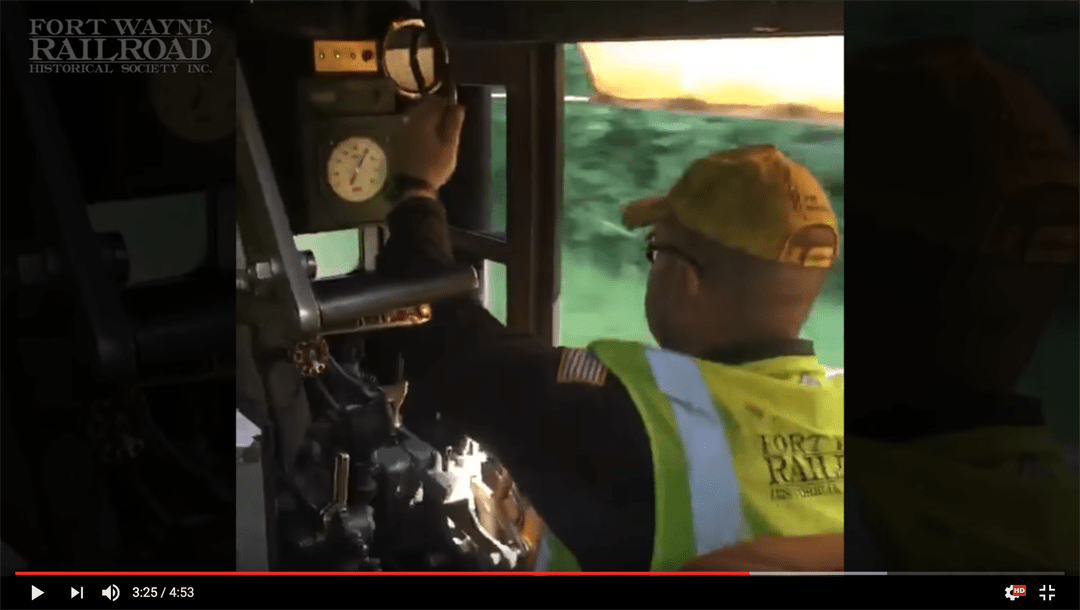 This exclusive footage from our one-day excursion between Glen of North Glenview, Illinois and Janesville, Wisconsin was originally streamed live on Facebook in 2016. The 765 made history topping over 70MPH on this trip.

END_OF_DOCUMENT_TOKEN_TO_BE_REPLACED

For the first time in over 40 years, a steam locomotive and special passenger train will operate arrive from Joliet, Illinois and arrive at downtown Chicago’s LaSalle Street Station, hosting visitors from the region and tourists from around the country. END_OF_DOCUMENT_TOKEN_TO_BE_REPLACED 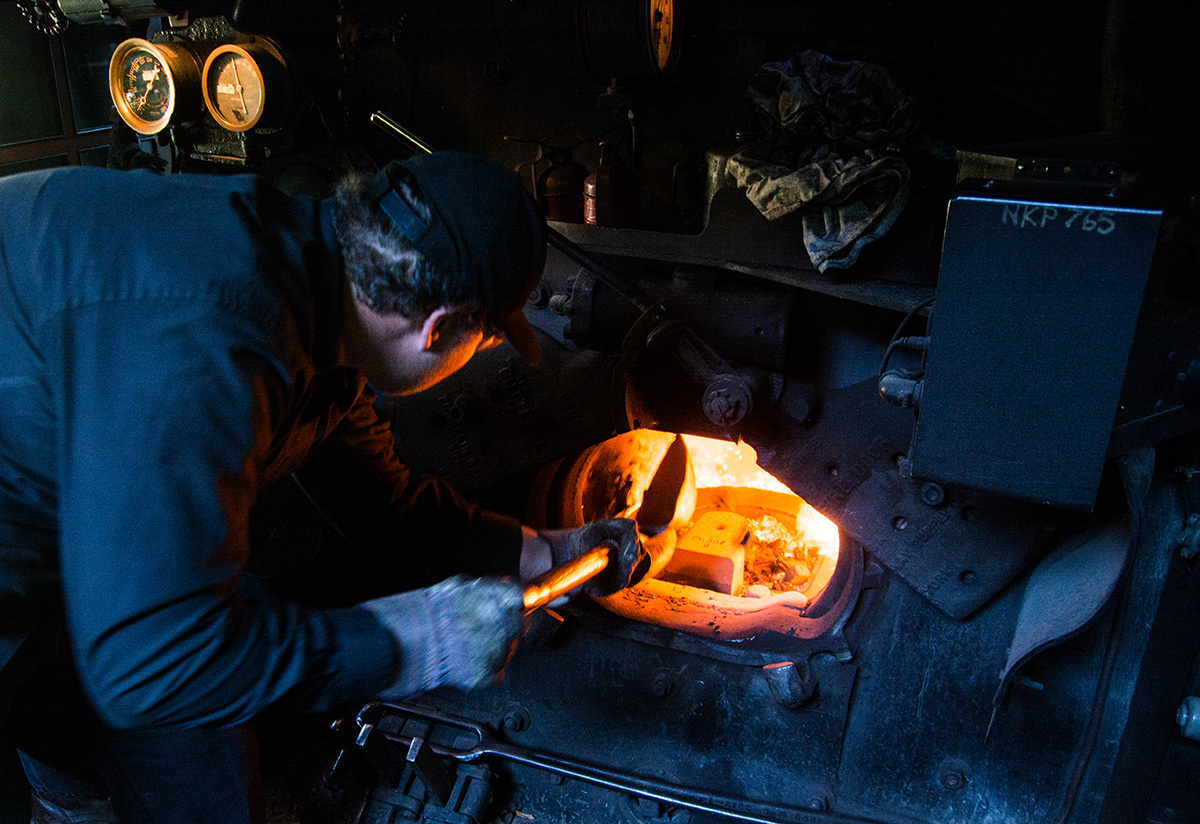 Nick Ozark and The Roundhouse podcast joined us at the Cuyahoga Valley Scenic Railroad in September. END_OF_DOCUMENT_TOKEN_TO_BE_REPLACED

October 28th is “Engine No. 765 Day” in Fort Wayne and Allen County. Why, you ask? Climb aboard and we’ll show you. 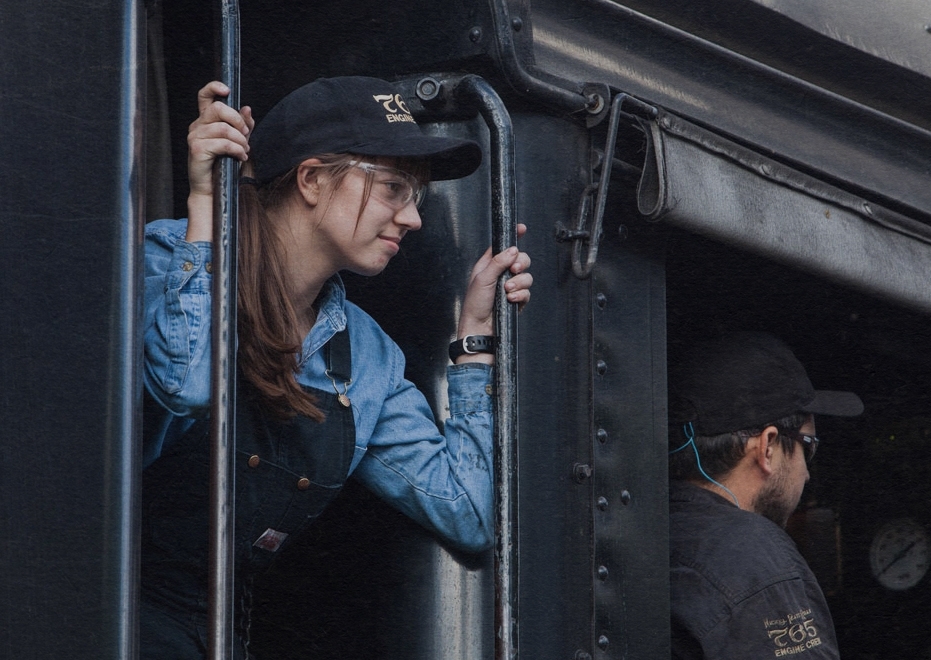 Who says trains are just for boys? END_OF_DOCUMENT_TOKEN_TO_BE_REPLACED