“The Engine That Still Can”

The volunteers who move the Nickel Plate Road No. 765 steam engine conduct a 400-ton symphony on rails. On Saturday morning, it was that whistle that alerted Kyle Timmerman, 21, of Pacific, that the 765 was approaching the Missouri River. He heard it before he saw the plume of white smoke on the horizon.

Taylor saw the black smoke and white steam of the No. 765 as it passed through Pittsburgh last week on its way to Harrisburg.

His wife tracked its progress through the website for the Fort Wayne (Ind.) Railroad Historical Society, which owns the mainline engine, to make sure the family did not miss its return.

â€œBut this had more novelty,â€ said Taylor. â€œIt’s not every day that a steam engine passes through your neighborhood.â€

Railroad enthusiasts lining the tracks included lots of elementary school-age boys and girls and even more older fellows who recalled the days when a steam train, especially through this area, was a way of life.

â€œThis is a once-in-a-lifetime thing. You may not ever see it again,â€ said Bob Freidhoff, a Vinco native now living in Pittsburgh.

â€œIt’s in first-class shape,â€ said Bruce Manwiller, 65, of Beaver Falls, a member of the Pittsburgh Chapter of the National Railway Historical Society, who chased the engine last week from Ohio to Altoona. â€œIt’s always put on a good show. It’s always been a dependable machine.â€

Residents from all over had been peppering the newsroom with calls about when to expect the engine, which was “deadheading” to Pittsburgh after weekend excursions in Harrisburg. The interest was intense.

Locals and out-of-towners from gathering along the tracks, many with cameras and video tripods, to watch and hear the steam engine and wave at its passengers as it proceeded on its journey.

For some, Saturday’s viewing was a chance encounter. Erin Steinhurst of Toledo happened to see the train while running errands in Maumee, and went to the Miami Street bridge to show her father the train because she “had never seen anything like it before.”

Trig Simon of Toledo saw Saturday’s crowd gathered on the bridge’s sidewalk and stopped after deciding there must be something worth seeing.

“It’s about the nostalgia and the history behind Toledo and its railroad heyday, and remembering what Toledo used to be as a railroad town,” Mr. Rude said.

Mr. Gorshoff said he thought the steam engine’s trip through Toledo would energize the city.

“I couldn’t believe it at first,” he said of hearing that the train would pass through Toledo. “I think it’s really going to give Toledo a shot in the arm — I think Toledo needs a lot of this.”

“It’s another reason to come by the tracks and watch trains,” Gatrell said. “When that steam train whistle goes off, you’re going to be able to hear it from all over.” 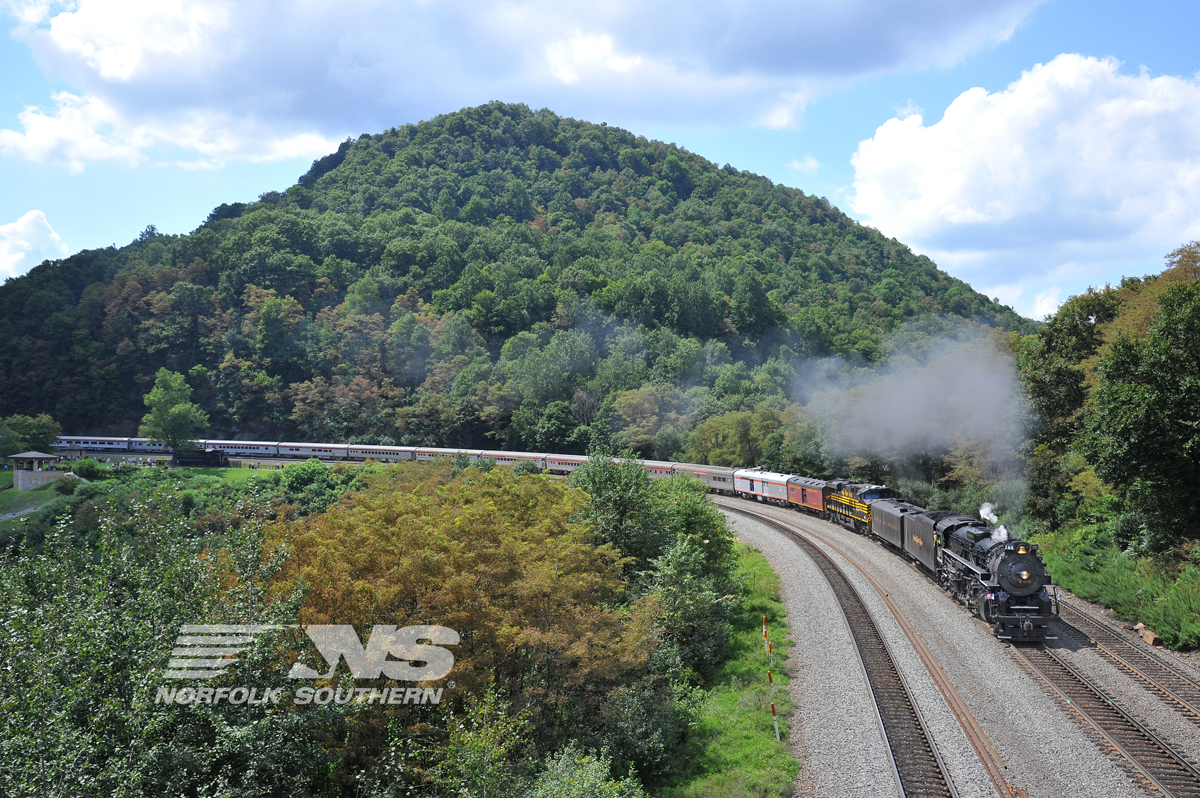 On the Verge of History

Monday, August 13th saw the 765 cross world-famous Horseshoe Curve on the downhill run to Harrisburg. On Monday, August 20th, the 765 will make the dramatic climb up the Allegheny Mountains back to Conway Yard in Pittsburgh.

The trip is planned to commence at 6AM from Enola Yards in Harrisburg. You can track the engine and route online at: http://www.765.org/locate.html and get updates throughout the day at https://twitter.com/nickelplate765

Monday’s schedule includes a servicing stop at Altoona and crew change at Cresson. No estimates are available beyond the times listed here. There will also be no stop at the curve.

We are proud to announce the release of our souvenir book: Magnificent Machine: The Official Illustrated History of Steam Locomotive no. 765. Available for pre-order at $25.00, this fully illustrated 92-page book covers the 765’s history from 1944 to 2012.

The Berkshire type steam locomotives of the Nickel Plate Railroad were among the best known and well liked of modern steam locomotives. Famous for speed, reliability, and economy of operation, they became the epitome of modern locomotive design. Since its construction in 1944, one of these locomotives has been on a path to become much more.

Throughout its preservation, rebuilding, and operation, steam locomotive no. 765 has become one of the world’s most famous time machines. Chronicled in stories and essays written and published throughout the locomotive’s public excursion and exhibition service, this book explores 40 years of preserving and making railroad history. 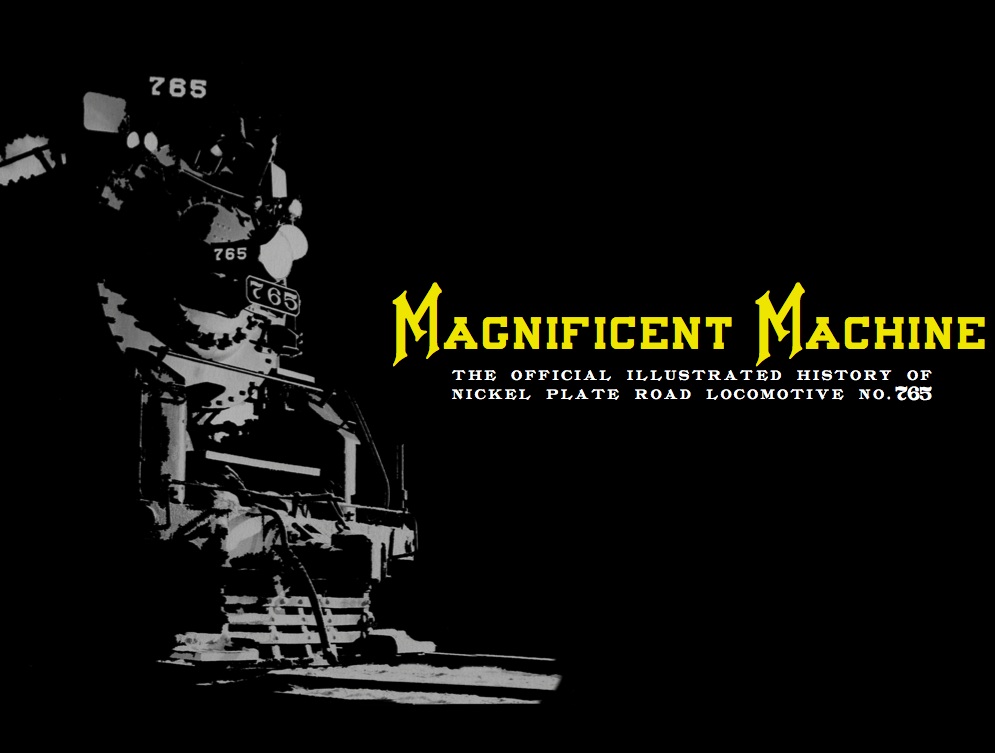 RailHound Podcast on the 765 and Norfolk Southern 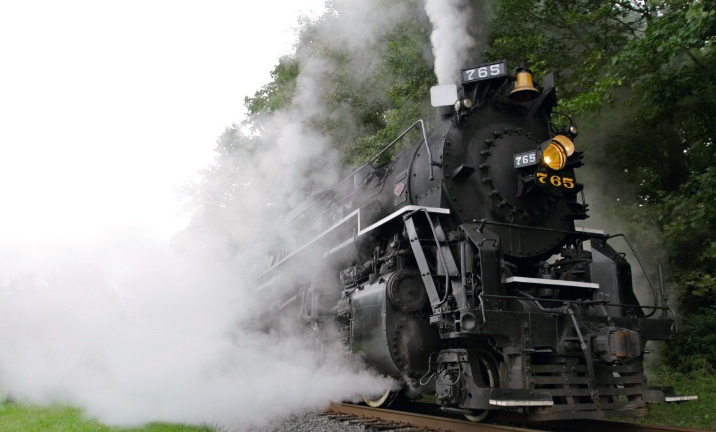 The railroad’s Employee Appreciation Excursions will be operated on weekends this summer and fall in recognition of the corporation’s 30th anniversary. Each of the railroad’s 11 divisions will host several excursions for employees and invited guests.

Southern Railway 630 will be used for the trips on the southern part of the system. No. 630 was built in 1904 by the American Locomotive Company at Richmond, Va., and is one of the three locomotives that will be used in NS’ 21st Century Steam program over the next four years.