By Kelly LynchApril 13, 2022News
No Comments 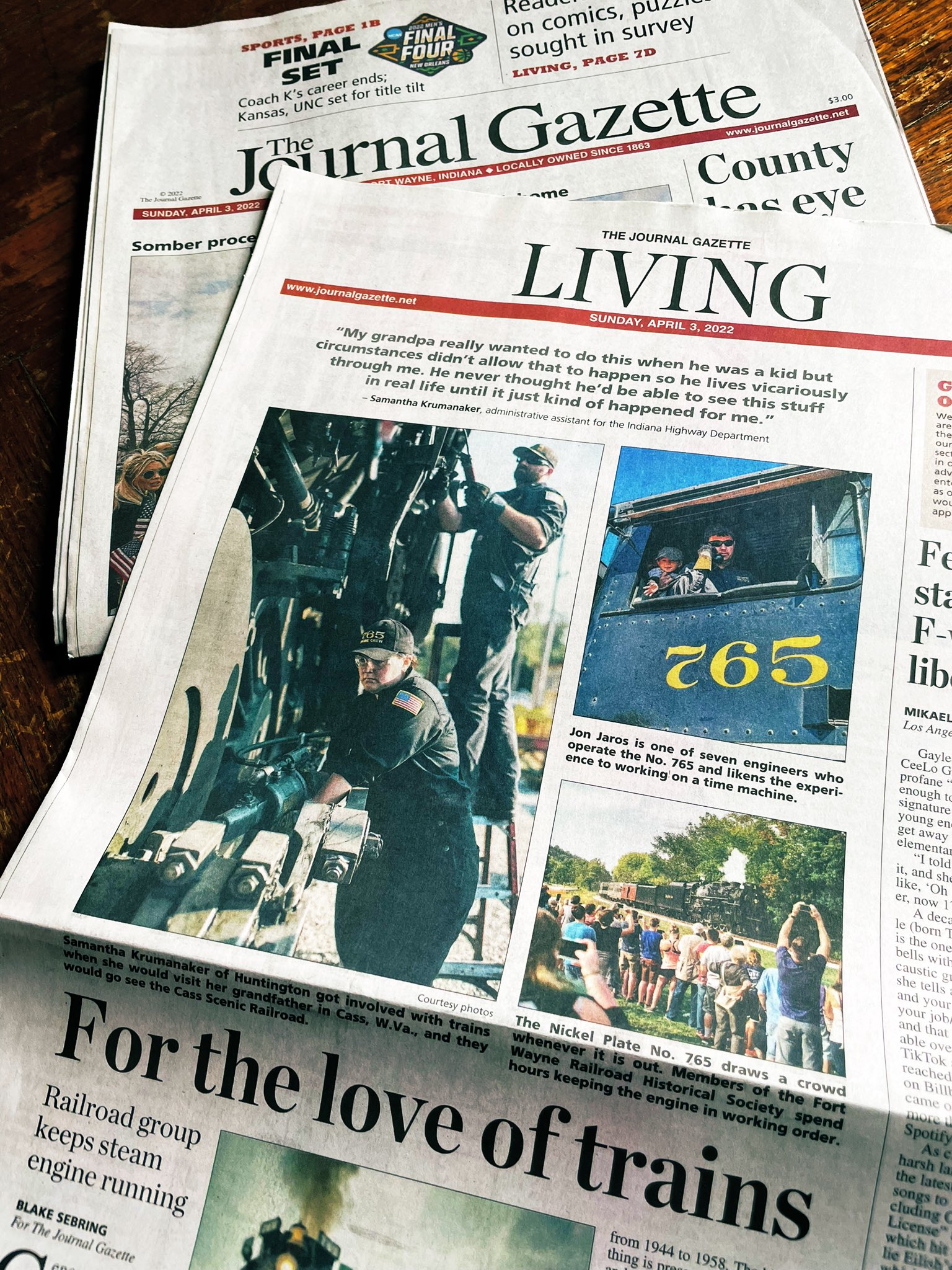 It seems that most everyone working inside the Fort Wayne Railroad Historical Society’s restoration workshop at 15809 Edgerton Road in New Haven has those connections.

A few were introduced when their dads started bringing them, and now, as the group celebrates its 50th year, members are bringing their sons, daughters and even granddaughters.

When Samantha Krumanaker of Huntington was a girl, she’d visit her grandfather in Cass, West Virginia, and they’d go see the Cass Scenic Railroad. Now she’s 29, an administrative assistant for the Indiana Highway Department and spends her Saturdays helping get the Nickel Plate No. 765 ready for the upcoming season.

“My grandpa really wanted to do this when he was a kid but circumstances didn’t allow that to happen so he lives vicariously through me,” she said. “He never thought he’d be able to see this stuff in real life until it just kind of happened for me.”

Her grandfather, Ernie White, enjoys each visit to the warehouse just like the little kids who jump up and down and wave every time the 765 engine goes by during an excursion. Each time the 765 engine rolls down the rails it makes crowds feel young again, and for some, bringing back childhood dreams of becoming a train engineer.

“We’re doing what nobody else is doing,” said Jon Jaros, one of the 765’s seven engineers. “We’re working on a time machine.”

There’s plenty of nostalgia involved whenever the steam locomotive goes out, and not just from those watching on the side of the tracks.

“For me, it’s being part of the history,” Operations Manager Zach Hall said. “When we leave Fort Wayne, somebody sat in this same seat and looked out over these same farm fields from 1944 to 1958. The biggest thing is preserving the history and making it to the different places that we’ve never been, going over railroads that haven’t seen passengers or steam engines in many, many years.”

Hall calls the 765 a people magnet, and it draws him to Fort Wayne from his home in Altoona, Pennsylvania, making the 61/2 hour drive 15 to 20 weekends a year to work with his friends. There are lots of similar stories inside the workshop, including how family-like bonds have been formed by the unending work, grime and camaraderie.

“I kind of just fell into the right group of people,” Krumanaker said. “I just started hanging out with them, and they invited me to come over here and I haven’t left. It felt natural, like I totally belonged here. As hard as they try to get rid of me, they can’t.”

Volunteers give up every Saturday to help out. According to Hall, the 765 requires 15 to 20 hours of maintenance for every hour it spends on the tracks, and that doesn’t include the rest of the refurbished cars such as the recently completed caboose.

“All the parts on this are heavy and dirty, and you have to work into figuring out you just have to get in there and don’t worry about getting filthy because you will,” said Mechanical Manager Steve Winicker, 72.

The New Haven native joined the organization a couple of years after it started in 1972, and now his job is to figure out what needs done on the trains and then show or tell everyone what to do. Because of federal regulations, paperwork and inspections are constants. There are tons of knowledge required from the crew, not all of it learned from manuals, and Winicker has lots of stories about how ingenuity led to solutions.

“I’ve seen things that I never thought would be the slightest possibility early on, but I’ve seen them happen,” he said. “There have been a lot of people here who kept it going for all those years, in good times and slow times and hard times.”

But right now is one of the good times.

Hall laughs and calls working on the train a hobby that has gotten way out of hand, but the specialization has also led to “day-job” careers for many of those involved.

“What’s even endearing to me is this machine and our programs and events and everything we do appeals to everybody,” organization Vice President Kelly Lynch said. “You don’t have to be a train fan or a history fan to get caught up in the magic. I’ve seen it firsthand. The railroads were the melting pot of the 20th century, and what we do now carries on that appeal.”

The society has nearly 1,000 members from across the country and even around the world, about 100 who volunteer regularly to help operate the 765 over 16 states.

The 2022 season starts in mid-May with the annual “Steam in the Valley” event to the Cuyahoga Valley in Ohio. More information is available at fortwaynerailroad.org. In addition to events in Ohio, there will soon be announcements on Indiana excursions, too.

The group’s biggest hope is to find a centralized showcase area home so more people can enjoy what they do as a regional attraction. That effort – known locally as Headwaters Junction – continues to pick up momentum despite a long gestation period, Lynch said.

“It’s been my mission for most of my adult life to ensure that this organization exists for another 50 years beyond me,” Lynch said. “So here we are in our 50th year, and it really puts things into perspective. We want to keep doing what we’re doing and bring joy and education to people for the next century.”