FORT WAYNE, IND. – The Fort Wayne Railroad Historical Society, Inc. (FWRHS) announced today an agreement with the City of Hammond to facilitate the relocation of Nickel Plate Road steam locomotive no. 624 for preservation.

No. 624 is a Mikado-type locomotive built by the Lima Locomotive Works in 1922 and donated to the City of Hammond in 1955 after racking up over a million and a half miles in freight service for the New York, Chicago & St. Louis Railroad, more commonly known as the Nickel Plate Road. In recent years, 624’s condition has deteriorated due to exposure to the elements. The FWRHS has owned and operated Nickel Plate Road no. 765, a larger Berkshire-type engine rescued from a local city park display in 1974.

“It’s been disheartening to see the deterioration over the years,” stated Hammond Mayor McDermott. “I’m happy to see it go to a good home.”

“Conversations about what to do with park engines like the 624 can be challenging for any community and its rare to have both the right opportunity, partners and experience as we do in the situation with 624,” stated Kelly Lynch, vice-president of the FWRHS. “We are excited for the opportunity to give this important artifact a bright new future and carry on the legacy of Hammond’s railroad history.” 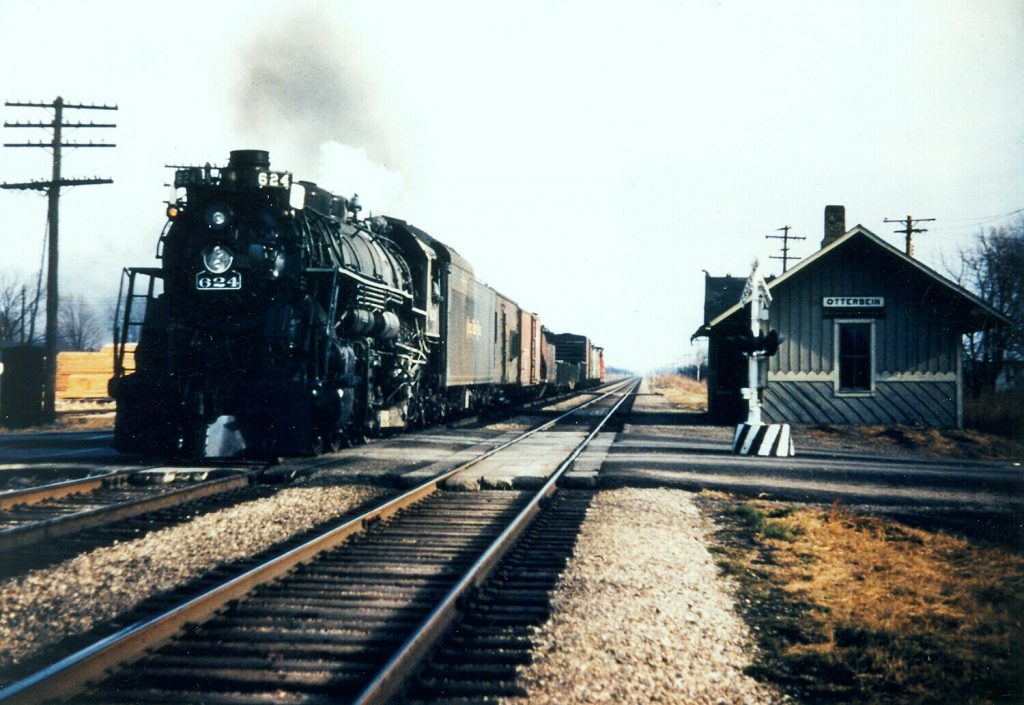 No. 624 will receive a full cosmetic restoration and may be considered a candidate for restoration to operation pending a more thorough inspection. The work to remove and rehabilitate no. 624 will be sponsored by a private donor who has stepped forward and offered to manage the restoration project with the FWRHS providing technical support. This approach will result in the expedited restoration of the locomotive, with a goal of eventually housing the engine at Headwaters Junction, a railroad attraction planned for downtown Fort Wayne. Due to space limitations at the FWRHS’ current facility, restoration will be performed at a private site in Northeast Indiana.

“The railroad preservation industry and organizations like ours have to innovate in order to achieve their mission and this approach allows us to keep time and resources focused on the 765 and our core operations, while giving another important artifact a new lease on life,” explained Lynch.

Lynch, whose family hails from Munster and worked at the Indiana Harbor Belt Roundhouse in Hammond, originally became involved as a consultant to the effort to preserve 624 in 2007 during the first meeting of the Northwest Indiana Railroad Preservation Society (NIRPS).

Since 624’s arrival near Hammond’s Civic Center, the engine has received occasional maintenance, including a critical asbestos abatement project in the 1970s. Recent efforts by the NIRPS hoped to further stabilize 624 against weather and vandalism, but work recently ceased. 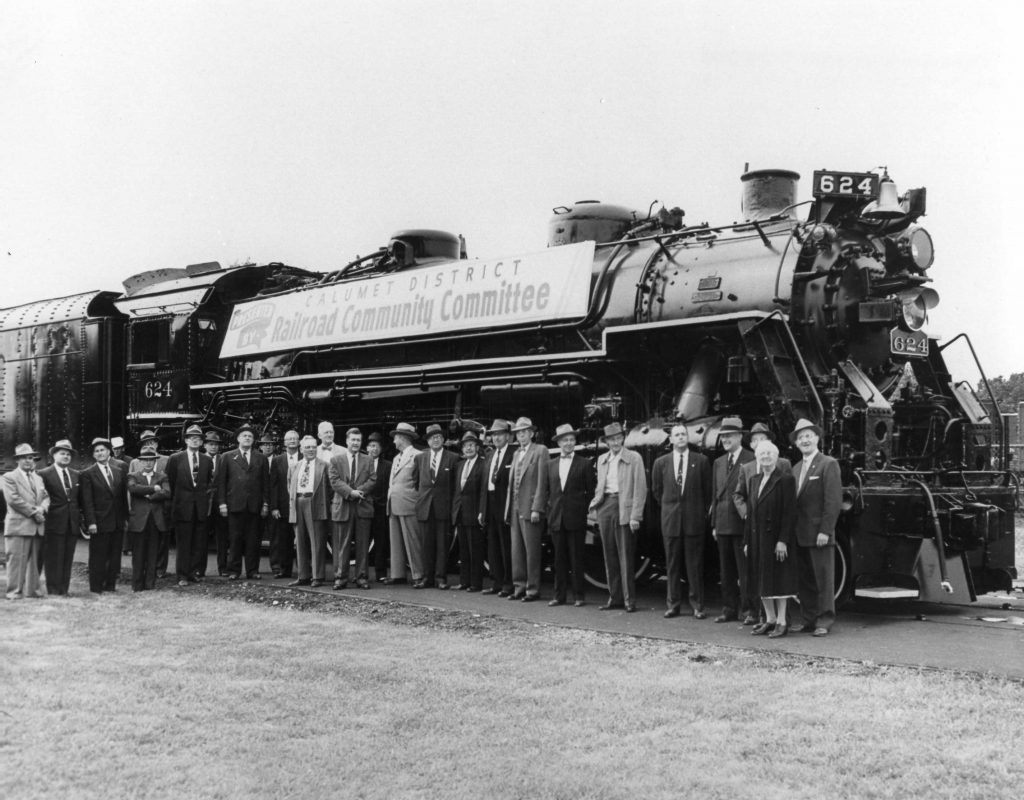 624 during the dedication ceremony in September, 1955.

“Considering how long the locomotive has been outside, it’s in remarkably good shape. The abatement early in its display life did wonders to preserve the boiler. While there is some obvious deterioration, it can be repaired. Beneath all the rust and faded paint is a locomotive in decent condition,” stated Zach Hall, the society’s operations manager and mechanical consultant. 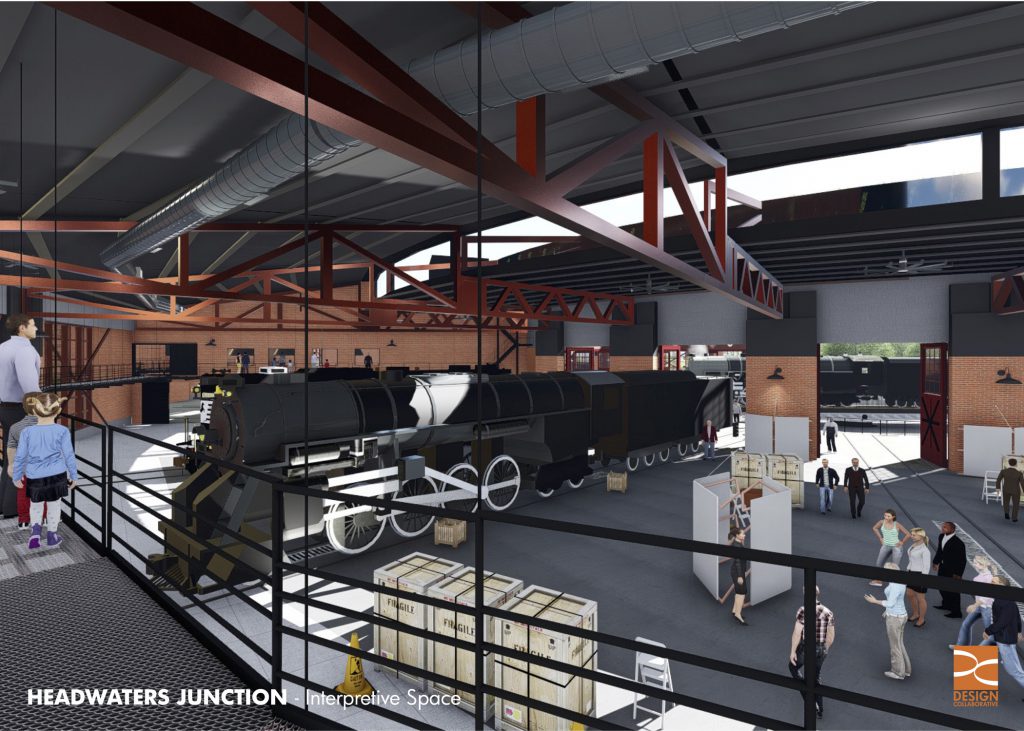 Headwaters Junction will feature restoration and interpretative space inside a recreated roundhouse. No. 624 will be one of several locomotives displayed – and potentially operated – here.

Current plans call for the 624’s boiler, frame and tender to be separated and trucked from Hammond.

Relocation and cosmetic work on the 624 is estimated to cost $250,000 and a full mechanical restoration could cost as much as $1.2 million dollars. Fundraising for Headwaters Junction is expected to begin in late 2017/early 2018. If the 624 is returned to operation, current plans do not call for it to operate consistently in excursion service like the 765, but several options are being considered.

“While a restoration to operation would be wonderful, the 624 will make a compelling attraction in Fort Wayne and be displayed in an evocative, exciting fashion,” Lynch added.

The 624 is considered a close relative to the society’s own no. 765, which has become synonymous with the City of Fort Wayne since its restoration. In recognition of no. 624’s connection to Northwest Indiana, the locomotive will be named the “City of Hammond.”

Like many of the railroad’s “Mikes,” no. 624 underwent a variety of mechanical updates as steam technology advanced through the years until retirement. Of the original 141 Mikados constructed for the Nickel Plate, 624 is one of three that remain with no. 639 on display in Bloomington, Illinois and no. 587, currently undergoing restoration, at the Indiana Transportation Museum.

In one of many letters of endorsement provided to the City of Hammond for the project,
David Vaughn, National Director for the Nickel Plate Road Historical & Technical, Society, Inc, wrote:

“624 is a historically significant piece of Nickel Plate history. It is important to the history and heritage of the railroad and to the State of Indiana through which she ran that the engine be preserved, properly cared for and potentially restored to service. The Fort Wayne Railroad Historical Society Inc. is a well known and highly respected organization. It is important in this regard to thank the City of Hammond, Indiana for its custody and care for NKP 624 over the years.”

The railroad historical society is also seeking new homes in the region for the additional railroad equipment at Sohl Avenue, which includes a South Shore caboose built in Michigan City and a Milwaukee Road refrigerated car. There is no immediate timeline for the move of any of the equipment on display, though the work is required to take place before October 31st, 2017. The FWRHS is currently seeking parts and components removed from the 624 by collectors or organizations for use on other locomotives which include the whistle and builders plates.

The railroad historical society extends its thanks to the City of Hammond, Mayor Thomas McDermott, Jr., Mark Heintz, Hammond Parks and Recreation and the Hammond Board of Commissioners.

Updates on 624 will be made available to members of the FWRHS and periodically at fortwaynerailroad.org and on its social media channels. 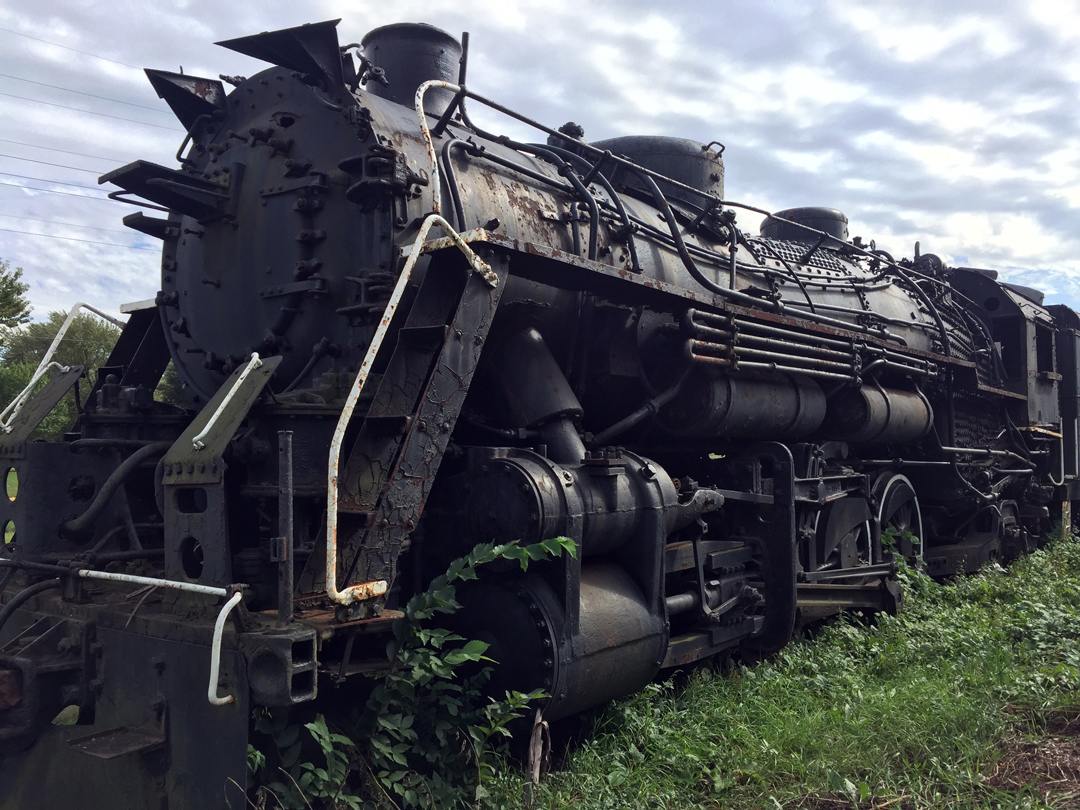 624 at its display site, October, 2016. The locomotive’s headlight, Mars light and numberboards have been recovered. 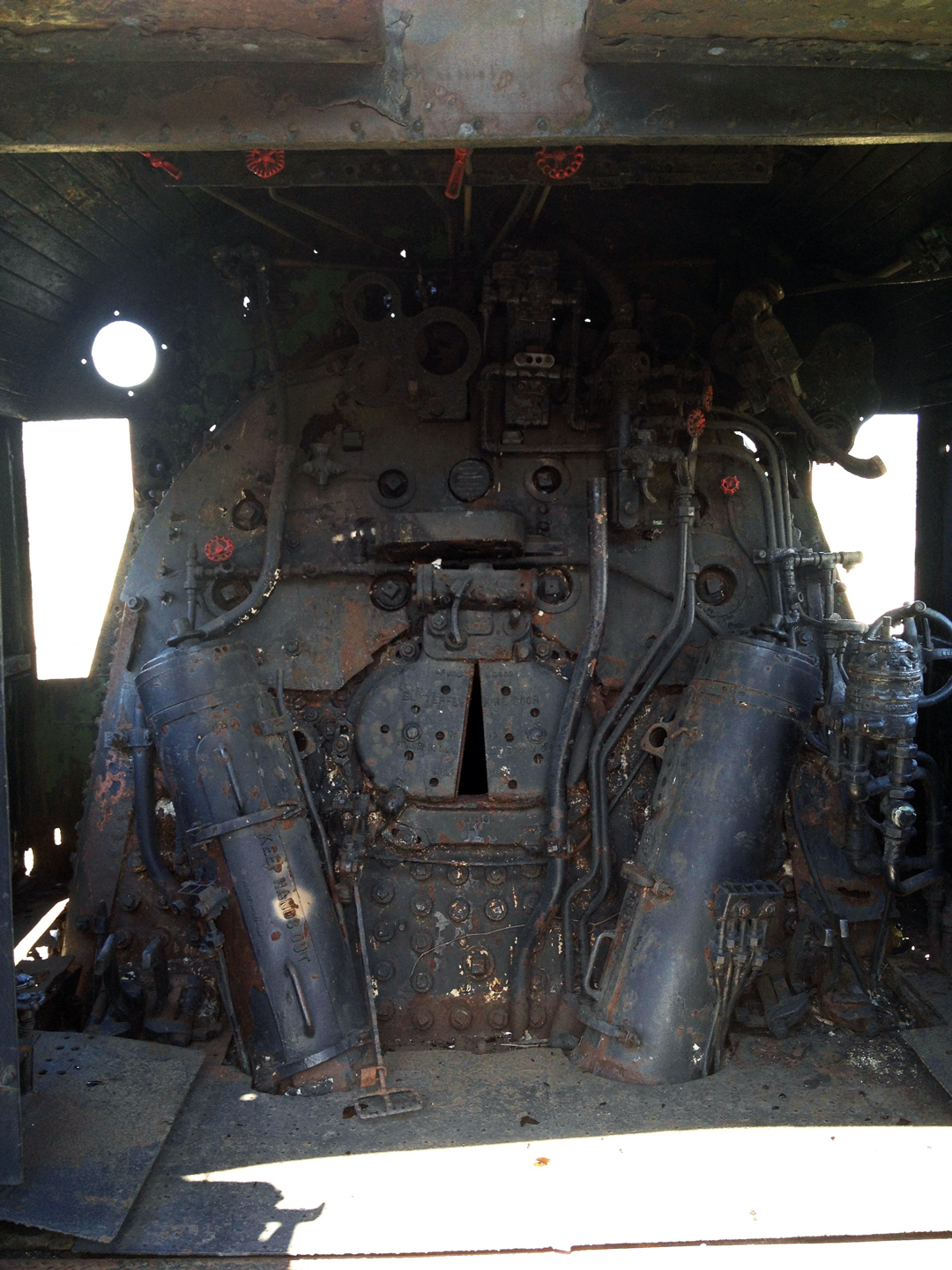 The 624’s cab is missing many appliances, with several believed to have been borrowed to support other steam operation efforts in the 1960s. 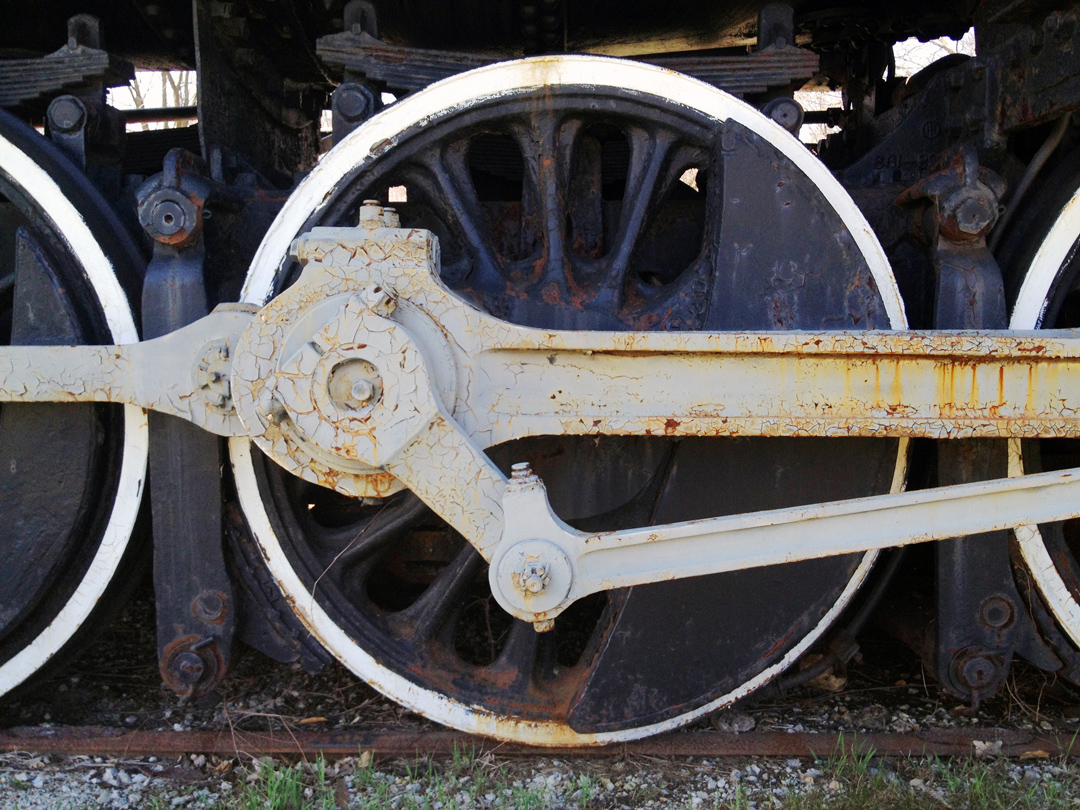 The 624’s drivers traveled over a million miles.