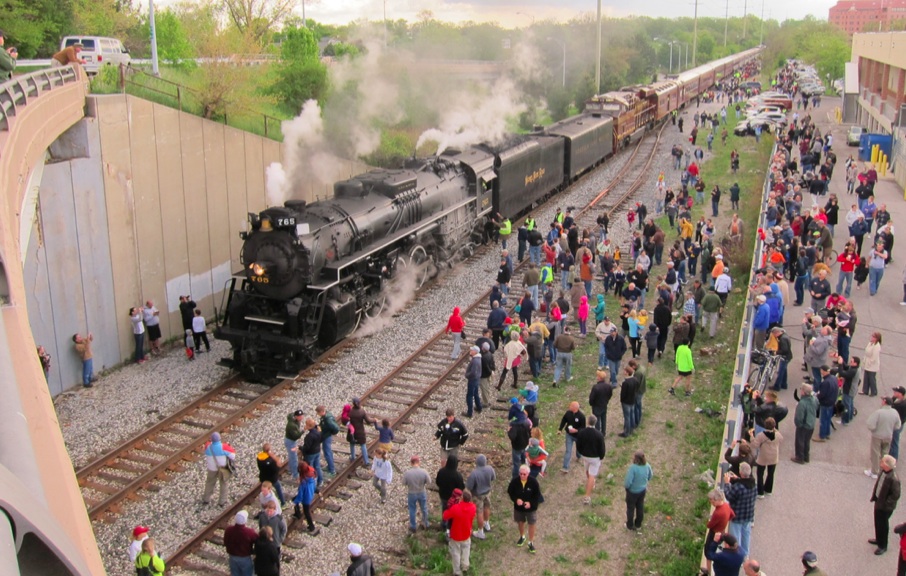 At about 8:50 a.m., the word came that the No. 765 was five minutes out, running a bit behind schedule. (Another difference from the old days was a smartphone app that follows the train’s progress). Police cleared away photographers and others close to the tack, then, far down the rails, a headlight appeared, growing larger as the steam-wreathed engine roared past the station, vintage restored cars in tow.

As it rolled to a stop, passengers scrambled to find their car, and photographers swarmed, capturing every angle of the train from its massive wheels (about as tall as a 6-foot person) to the hissing front of the engine, bearing the numbers 765.

After all were aboard, the haunting steam whistle announced its departure as the train rolled off to Bellevue, the small, white Rocky River station, now an office for Norfolk Southern railroad, becoming deserted once more.

At about 4:10 p.m., the train returned to a group of about 100 onlookers, happy passengers disembarking. â€œIt was a fantastic trip,â€ Brink commented. He said that the trip to the museum, which was outdoors, was cut short partially due to the cold weather, featured a walk-thorough of an old post office car and a World War II troop carrier.

The passengers then returned to their cars as the train, sounding its whistle again, disappeared into a cloud of steam.

Story and video From CBS Pittsburgh:

Freight trains pass each day near the banks of the Ohio.

But the track through Beaver County soon would bear the weight of a steam train from the past.

Word that Engine 765 was on its way from Ohio lured train buffs to railroad crossings up and down the line. They waited, cameras ready, for history to rumble down the track.

â€œIt’s a lot of fun and it gives the younger generation a chance to see what it was like in the old days,â€ said Jeff Bartlett of Cranberry Township.

Above the Conway Rail Yard, they waited.

Steve Heister came down from his home near Cleveland.

â€œEver since I was a little kid, I’ve wanted a toy train,â€ he said. â€œThen I got involved with a trolley museum in the area, and decided twelve inches a foot was a nicer scale, but I still like this stuff.â€

The 765 arrives in a plume of steam, well worth waiting for. Next best thing to riding it.

This past weekend, Conway Yard employee John Ball did just that.

â€œIt was really smooth,â€ he recalls. â€œIt was a really awesome trip.â€

Photos, video, and story from the Tribune-Review:

Nickel Plate Road No. 765, a 404-ton Berkshire steam locomotive, rambled through Allegheny and Westmoreland counties on Monday on its way to Altoona.

â€œThank you for a great showing,â€ tweeted Daniel Udrija. â€œIt was so nice to watch it go by in Avon Lake with my 19-month-old daughter. She loved it.â€

The dead-head trip â€” meaning the locomotive is without passengers or freight â€” continues eastward to the Harrisburg area on Tuesday.

The Fort Wayne, Ind.-based locomotive, built in 1944, will carry Norfolk Southern employees around Horseshoe Curve outside Altoona on Saturday and Sunday, and will be used for public trips around the bend between Lewistown and Gallitzin from May 25-27. Tickets for the public trips sold out within 24 hours in February.

No. 765 will pass through the Pittsburgh region again on May 29 and stop at the Conway rail yard in Beaver County.

Photos and story From Fox 8 in Cleveland:

ROCKY RIVER, Ohio â€” Residents and train lovers in Rocky River were taken back to the days of steam power Sunday.

The Fort Wayne steam locomotive No. 765 was in town, operating trips for the public. It departed Rocky River and was to head to Bellevue on a round trip.

The locomotive was built for the Nickel Plate Road in 1944 and operated trains between Chicago and Fort Wayne until 1958. It later underwent an intense, five-year renovation effort costing around $750,000.

It now is used, in part, for public trips.